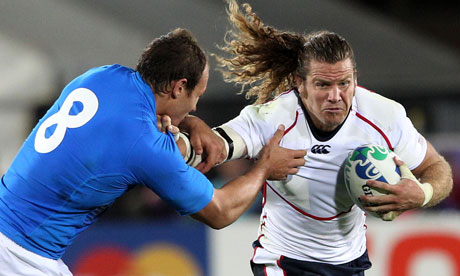 BOULDER, Colo. – Men’s Eagles coach John Mitchell will have a mix of veterans and youngsters in his first assembly with the national team, as 37 athletes have been made available for the inaugural Americas Rugby Championship.

Longtime U.S. captain Todd Clever returns to the fold with fellow Newcastle Falcon Eric Fry, while Cam Dolan, Taku Ngwenya, Greg Peterson, and Blaine Scully have also been released from their respective professional overseas clubs for at least one match of the groundbreaking competition. Each will be in Houston for the opening round of the tournament Saturday, Feb. 5, at BBVA Compass Stadium.

In all, 15 members of the greater squad have received an international cap, and 11 went to England this past fall as part of the Eagles’ Rugby World Cup 2015 team. Eight ARC selections, including 22-year-old back Lemoto Filikitonga and 24-year-old scrum half Niku Kruger, traveled to South America last February for three matches against Argentina and Uruguay as members of the USA Rugby Selects.

Last winter’s trip to the southern hemisphere yielded positive results on and off of the field, as the Selects defeated Uruguay while several players made cases for future selections to the national team. Likewise, the ARC’s five matches will offer 12 athletes the opportunity to earn caps as well as impress the new coaching staff at the beginning of a World Cup cycle alongside seasoned internationals.

“The contracted players overseas bring the necessary experience of professionalism from their club cultures and, as long as they bring the right enthusiasm with that awareness to their preparation and performance, this rubs off on the younger players,” Mitchell said. “This is such an essential part of the younger players’ development with our most experienced players around.”

All-Americans in recent years, Cameron Falcon, Hanco Germishuys, David Tameilau, and Mike Te’o continue to build off of their time with Taranaki Rugby in New Zealand with ARC selections. The latter two will be in the squad for all five matches above and below the equator, while Te’o’s teammates at the Olympic Training Center – Pat Blair and Nic Edwards – will be available for the home matches againstCanada and Chile.

Nearly two-thirds of the squad is under the age of 27; several players are either in college or recently graduated, including recent USA Falcons Kingsley McGowan and Aladdin Schirmer. Falcon, McGowan, Schirmer, and Te’o won the 2012 World Rugby U20 Trophy with the USA Rugby AIG Men’s Junior All-Americans, and have stuck with the Eagles pathway, suiting up for the AIG Men’s Collegiate All-Americans in some form prior to 2016.

Domestic champions Glendale Raptors and Seattle Saracens combine for eight players selected to the ARC squad, with 13 clubs based in the United States represented. As Mitchell and the coaching staff continue to familiarize themselves with the domestic landscape and the intricacies of club rugby, athletes not with the team in February and March will have the ability to earn selection to future assemblies.

“Our team culture, our model of communication, and weekly processes will be consistent and inclusive of everyone, whether you are in camp or you go back to your club,” Mitchell said. “What is important is that our preparation does not ignore simple situations to learn with high-intensity preparation. Then it’s up to us to stick to the same things and get better at it over the five weeks, bedding down our approach from day one for the players to become unconscious in their thinking to play without consequences for having a crack within the structure.

“Everyone involved will have to give more of themselves and play in a space where they have never been before. We are more interested in creating a team mix and squad that understands winning for USA is more important than playing for USA.”

The Eagles kick off their ARC campaign against fifth-ranked Argentina before matches against Canada,Chile, Brazil, and Uruguay, respectively. Tickets are still available for the three home matches, with broadcast details to be announced at a later date.