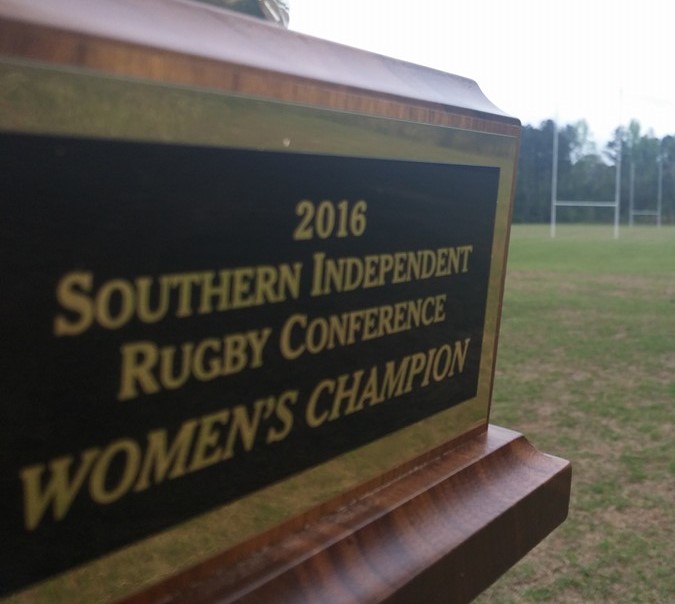 University of Georgia Women’s Rugby took their first South Independent Rugby Conference title this past Saturday, with a win over Tulane, 15-10.

The championship was the an absolute nail biter. Tulane came out hard and fast scoring two quick tries, both in the corners, just 11 minutes into the game. However, after that it was UGA with most of the possession and with the better conditions, they maintained that possession well. They were able to use a few strategic kicks for better territory and produced a number of attacking phases. It’s very tiring to play a lot of defense so UGA’s excellent ball retention started to wear on Tulane. UGA was extremely patient and it started to pay off. In the final 25minutes of the game, they produced some well worked team tries, tying the game with 20 minutes left. It looked as if it might end with regular time at a draw, but as UGA continued to threaten close to Tulane’s try zone, they eventually were able to put in one more try before the final whistle.

The semi-finals for the SIRC Championships were no cake walk. The first day was wet and sloppy so handling in the first game, University of Georgia vs. University of Tennessee-Chattanooga, was challenging. Georgia would grind out the win, taking a close one 12-5 over UT-Chattanooga. By the second game of the day, there were still some patches of mud, but the conditions improved greatly with the exception of excessive wind.  Tulane faced off against Kennesaw State for the second game. Tulane was able to contain KSU’s major running threat, #8 Lydia Wood. Tulane also managed the conditions well and were able to produce quick phases and move the ball well to the edge. Tulane would win 22-8.

Day 2, the field was dry and there was plenty of sunshine, so the games produced a lot more of an open game for all teams. KSU was able to start their game against UT-Chattanooga strong, but headed into the half, UT-Chattanooga switched the momentum with 2 tries before the half. That momentum carried on into the the second half where they overcame a 19 point deficit to tie up the ball game just 4 minutes into the second half. However, KSU responded back and all the points can be attributed to 2 KSU players, Caitlin Fricia and Lydia Wood. Kennesaw State would take third place in the SIRC with a 29-19 win over UT-Chattanooga.

The Sweet 16s of the USA Rugby Women’s D2 Collegiate Playoffs will take place in Atlanta this weekend. University of Georgia will take on University of Arkansas, while Tulane will face off against Eckerd University.